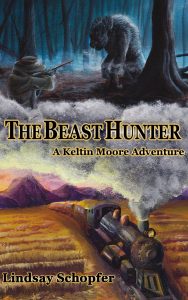 Halloween is coming up soon, and with thoughts of costumes and cosplay on my mind, I thought I’d answer a question that literally swarms of a couple of people have asked me: How to dress up as the characters from the Adventures of Keltin Moore.

I’m purposefully vague in a lot of my character descriptions, just because I want to make it easier for readers to put themselves in my characters’ shoes. That being said, Keltin does have some distinct articles and accessories. Most distinctive is his hunting coat, which could be a duster or similar style long-coat in earth tones. He also wears a hat, which I always envisioned as somewhere between a fedora and a cowboy hat – I’m still trying to find one for my own costume. If weapon-props are allowed, Keltin carries a long hunting rifle, a revolver in his belt, a hunting knife, and of course the Ripper, which is essentially a sawed-off glaive or similar pole-arm.

The Weycliff people are nomadic entertainers, so Jaylocke’s outfit is likely part-traveling clothes and part-stage costume. He’s described in The Beast Hunter as wearing a vest covered in buttons, which is actually a secret tribute to a gypsy character from the first stage-play I ever wrote called Love’s Folly. Jaylocke’s props are less defined than Keltin’s. He could carry a rifle, the Ripper, or a similar medieval pole-arm weapon. Oh, and a grin. He needs to be grinning. 🙂

Elaine comes from a higher class of society than most of Keltin’s associates, but she’s done her fair share of killing beasts as well. A mix of fashionable, yet functional clothes would be good (see General Tips below for the appropriate time period and location). Her weapon of choice is a rifle.

Good luck with this one! Bor’ve’tai is a Loopi, a sort of ape-man based on the gibbons of southeast Asia. Unlike Chewbacca, he wears the clothing of a laborer on top of his furry body. His favorite weapon is a woodsman’s ax.

While the world of Keltin Moore is steampunk fantasy, the steampunk elements tend to be more subtle then other works in the subgenre. A lot of the more fantastic accouterments that punks enjoy (mechanical arms, over-sized wrenches, googles, etc.) don’t really fit in the reality-based world of Keltin Moore. Use late-19th century fashions of both rural United States and Eastern Europe as a general style guide.

Oh, and if any of you come up with a costume for any of the characters of Keltin Moore, please send a picture! I’d love to see it!