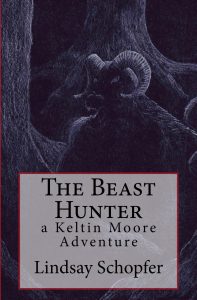 I thought I’d take a little time to give a brief look at one of the supporting characters in the Adventures of Keltin Moore.

How did he come to be?

The Loopi refugees in The Beast Hunter needed a leader and Grel’zi’tael was it. I felt it was important to show that the Loopi followed Grel’zi’tael primarily because they trusted his wisdom, rather than blind obedience like the soldiers follow Baron Rumsfeld. This contrast was a minor and more subtle reflection of the larger conflict between the soldiers and the beast hunters in general, one of the more important subplots in the novel’s second act.

What purpose does he serve in the story?

Grel’zi’tael is definitely a wise advice-giver in the story. He’s there to be the voice of calm reflection, full of compassion and insight. There’s almost a theatrical formality to the way he speaks, which is probably a throwback to all of the Shakespearean theater I’ve participated in over the years. On the other hand, he’s also got a genuineness that keeps him from feeling too melodramatic  or stiff. He’s like the old family patriarch that sits quietly in the corner during family reunions, happy to simply smile and watch the great-grandchildren play while ready to give a sympathetic ear to an adult that wants to talk about how things are really going for them.

There are a few moments where it seems like he’s got some sort of precognitive powers, but I’ve purposely left those vague and undefined. I like to leave it unanswered how much of that sixth sense is a result of his abilities as a Sky Talker vs. his natural insight and wisdom.

How did my vision of him change over the course of writing him?

Honestly, not very much. Most of the supporting cast and minor characters in The Beast Hunter stayed fairly consistent from conception to their published form, and all of the returning characters for Into the North were pretty firmly established already.

Where might his arc be headed in the future?

I see a great deal of Grel’zi’tael’s original purpose being assumed by Bor’ve’tai as the younger Loopi continues to grow and mature. Beyond that, it’s hard to expect that this much-older character will be going on too many more physically taxing adventures, so he’s probably going to be gently fading into the background to some degree.