I found my first Clive Cussler novel in a thrift store. I was there with my Mom as an unwilling young teenager, spending my time sifting through hundreds of tattered romance novels trying to find something that might appeal to a reader whose primary fodder up to that point usually involved dragons, swords, and spell-slinging. What I found was a bright-white paperback in surprisingly good condition with a large, bold-print title. Treasure. Reading the back, I saw two things that intrigued me: an oceanic theme and a James Bond-esque plot. I took the book home, not knowing that I was about to be introduced to an entirely new genre of storytelling.

In addition to themes of espionage, adventure, archeology, and cars, I soon found that the adventures of Dirk Pitt all had an oceanic flavor that I couldn’t get enough of. In fact, throughout high school, I was convinced that if I had to choose a career other than writing that I would choose marine biology. This came from a passion for the study of animal adaptation (a passion that powerfully impacted Lost Under Two Moons) as well as a love for the mystique of the ocean. With the possible exception of Robert Louis Stevenson, I can’t think of another author that tapped into that passion for the sea more than Cussler did. 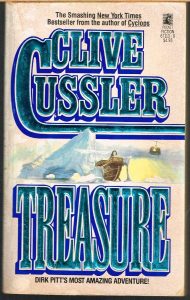 It wouldn’t be an exaggeration to say that The Adventures of Keltin Moore would not exist without Clive Cussler’s Dirk Pitt. Pitt was my first exposure to an ongoing series of adventure stories that featured a recurring cast, a formulaic narrative, and a stand-alone-style chronology in its installments. Granted, Keltin’s stories have more narrative thread between each story, but Clive Cussler was the first author I read who opened up the possibility of a series that you could read out of the order of publication.

As I delved deeper into the series, I soon learned that not all of Pitt’s stories were created equal. The first half-dozen or so were too rough and unpolished for me, and towards the end it was clearly evident that the passion had gone out of the series. But there’s a sweet-spot from the mid-eighties to I’d say the early aughts where the stories pop from the page with a reassuringly familiar formula.

Speaking of which, I know that some people may immediately assume it’s a criticism when they hear the word “formulaic” when describing a series of books. However, formulas are not inherently bad. In a literary sense, they are simply a narrative structure that the author uses, knowing that if they follow this structure, they will likely illicit a similar response in the reader each time the formula is used. The reader (whether consciously or unconsciously) knows this too. It’s why we say things like “I feel like a good scare. I’m going to read a paranormal thriller.” Or perhaps “I just want to feel good. I’m going to read one of my favorite Regency romances.” In my opinion, I think formulas are fine as long as the author is willing to experiment with elements that are not a part of the regular formula or uses unrelated stories to try something new and different.

It’s been years since I last read a Dirk Pitt adventure, mainly because I’ve been working through a large stack of recommendations that I’ve received over the years. However, I think it may be time to put some ocean-themed adventure back into my literary life. I think I’ll start with Treasure.

If you’d like to become a patron and gain access to sneak-peaks and shout-outs, check out my Patreon page here: